Dear friends,
I entered a t-shirt contest that ends Sept. 10th. The design challenge was to create something Barry Manilow themed. Winner gets their t-shirt printed/sold and two show tickets to see Barry in Vegas. Because he has a regular gig at the Paris Hotel in Las Vegas, my thought was the line "We'll always have Paris" - in combination with a vintage Bogart look for Barry.
I would greatly appreciate your thumbs up vote!
Mr. Manilow is an artist I've created a cartoon of way back in high school. It would be a dream come true to have something actually come from cartooning him. :-)
Thank you for your votes and if you like the design, share the link and encourage others to vote too! The more the merrier.
Here is the link.
Posted by Jackilope at 8:43 PM No comments: 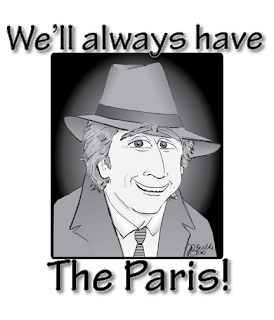 Here's the entry I plunked up. The unfortunate thing about waiting until the last minute is the panic that sets in when the design still isn't on the contest site!!! Here's hoping it uploaded okay. If not, hopefully there will be another contest someday.
Everyone gets one vote and there are lots of neat designs to choose from. Any votes toward this design are very appreciated.
Posted by Jackilope at 10:47 PM No comments:

No Such Thing As a Free Avatar

A friend of mine wanted me to draw him an avatar for his social networking icon. Due to some of his commentary on my posts ... he became a bit of a pest. I decided giving in this form is better than receiving. 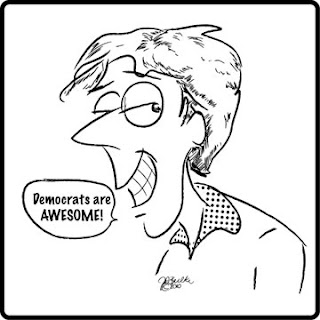 Posted by Jackilope at 11:27 PM No comments:

You've got to hand it to the fan club headquarters with Camp Manilow -- they have it figured out how to earn easy money.
Hold a convention in the town that the entertainer is at, have a package where attendees can have a few meals, a few shows, a scavenger hunt, and a Q & A .... and not even have the honored entertainer show up and thank people for showing up outside of the normal concerts. This convention isn't cheap -- especially given this economy. Yet, a Manilow fan can be expected to shell out over $1000 for the event and not even see Mr. Manilow in an informal or safe gathering -- be it a brunch or a Q & A setting. In his place, the face of the fan club, Garry Kief, answered questions and met the fans. While disappointing that Mr. M could not be troubled to attend or answer himself -- it wasn't false advertising, as of course, they wouldn't really commit to writing that Barry himself would be present at the Q & A. Another great way for the fan club to make that easy money. Don't promise too much, don't deliver too much, for the fan base will always be there no matter what.
Yes. Barry Manilow cannot be bothered to attend his own convention.
Much of the appeal of being a Manilow fan in my youth, was that he seemed like such a sincerely nice guy. The underdog, the singer of love gone wrong ... the fellow that liked beagles. Perhaps somewhere deep inside or to some he is. Right now, the man doesn't seem like such a nice guy. When your long time fan base cares enough to trek to Vegas to attend an expensive convention in your name -- the nice and appropriate thing to do is show up and make nice with those that appreciate your music and those fans that over your career purchased your goods and dragged their family or friends into attending your concerts.
I considered drawing a cartoon illustrating Mr. M and camp stuffing the wads of convention cash in bags and realized even a CARTOON of him couldn't say "thank you" if he couldn't. If he can't lift a single finger to get out of his comfort zone and greet the fans -- I can't be bothered sketching up a cartoon figure even trying to make up for his lack of gratitude or sense of right.
It does seem that the gambling for fans always happens before Vegas. One gambles whether their grand will be the payoff of Barry showing up at his own party/convention or not -- despite it being held in his own territory and digs. What I cannot understand is the acceptance by some that buy the "oh, the poor dear, he's too busy to see us. Well, there is always next year." Fandom in Manilow circles is quite dysfunctional that way. Enabling bad behavior will result in further bad behavior. It isn't likely to change unless some honest dialogue and some expectations are established. It's long overdue that the average Manilow fan consumer become a critical consumer and communicate the only way it seems the fan club listens.... with your dollars not falling into Manilow and Co's laps so easily.
Posted by Jackilope at 12:43 PM 1 comment: 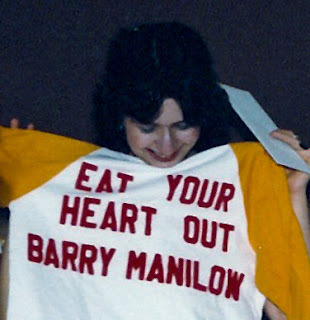 In high school, I was definitely a huge Barry Manilow fan. So much, that when one of Barry's televised specials was scheduled on my graduation night I was asked to confirm I'd go through graduation as opposed to staying home to watch it. (This was before VCRs in households were common place.)
Well, duh, yes I'd go through graduation. One of my presents that evening was this t-shirt.
Posted by Jackilope at 9:58 AM No comments: 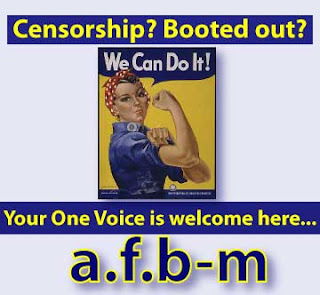 It seems more and more fans that belong to the Manilow Network Ning are getting notice and booted out. Not sure what the deal is or why so many are finding themselves no longer welcome. There is an alternative though, the alt.fan.barry-manilow newsgroup on Usenet. It is completely public, there are no moderators, you are welcome to contribute and speak freely.
Posted by Jackilope at 4:45 PM No comments: 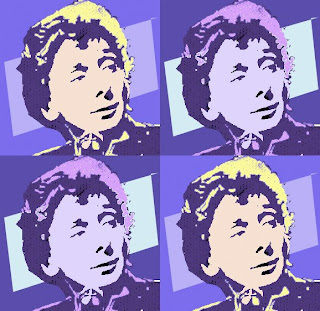 Posted by Jackilope at 9:22 PM No comments: